True to Your “Yom Kippur Selfie”

The morning service almost complete, the early sacred moments of this day almost concluded, and the sermon just beginning, I am going to do something we are not allowed to do in our Sanctuary during the service!

turn them on…if they have been turned off…

make sure they are on mute… (I wouldn’t want us to be interrupted!…)

Now gather those around you into a little group….  Bring up your camera app…Reach out…

and take a Yom Kippur “selfie” …

You are welcome to take a moment to Tweet or FaceBook or put the picture onto Instagram…. (perhaps you can find a teenager in your group to help you!)

Make sure to tag me – “ravlinda” or “Linda Joseph” – or Beth Chaverim Reform Congregation – and of course tag anyone else in your photo (ask them how). 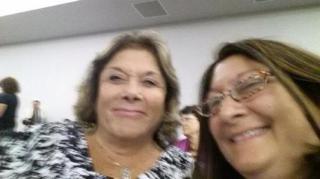 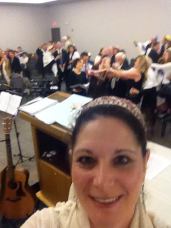 So now we are part of the “selfie” trend! “Selfie” was included in the Oxford Dictionary last year and nominated as the 2013 word of the year – because everybody was doing it. Our President, Barack Obama, made the news at the celebration of Nelson Mandela’s life when he took a “selfie” with the Danish and British Prime Minister. Pope Francis has been in on “selfies” with tourists at the Vatican. Ellen DeGeneres put together a celebrity “selfie” at the 86th Academy Awards last March with Meryl Streep, and other film notables, and her tweet of that picture went immediately viral – over 2 million times before the ceremony finished and 2.8 million times in the following 24 hours. By last June, it had almost 3 ½ million tweets.[i]

I wonder how viral our Yom Kippur “selfies” will become?

And what will these Yom Kippur “selfies” we just posted, tell people about us, and our Day of Atonement here at Beth Chaverim Reform Congregation? They say a picture tells a thousand words, but let us ask ourselves, does it really? Some of the most famous photographs can mislead us or have more to them than one would assume.

Most of you will be familiar with the infamous Victory-Over-Japan Day photograph by Alfred Eisenstaedt, of an American sailor kissing a woman in a white dress in Times Square in New York City, on August 14th, 1945. It was published in Time Magazine with the caption: “In New York’s Times Square a white-clad girl clutches her purse and skirt as an uninhibited sailor plants his lips squarely on hers”, her body arched as she leans backwards, the intersection of Broadway and 7th in the background. 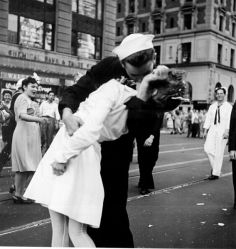 Certainly this photograph catches the jubilation of the moment. But the picture is not the end of the story. This sailor, reports the photographer Alfred Eisenstaedt, was running down 45th kissing every girl insight. Eisenstaedt took this photo because of the drama of the sailor dressed in white, kissing the girl in a white nurse’s uniform. If the color scheme had not been right, he may not have even made the shot.

Post publication, there has been controversy over many years surrounding who the sailor and woman are in the picture. Several people have come forward claiming to be the young couple, and there have been witnesses testifying, photograph analysis, and even polygraph tests to try to verify who is actually depicted.[ii]

Our “selfies” often do not tell a full or complete story. They are a façade of what is happening. Nina Nesbitt in this year’s chart-hitting song “Selfies” speaks about how her “selfies” belie what she is feeling inside. She sings her jilted lover angst, and her pop video clip displays her taking pictures of herself having a good time, to post, in the hope of reigniting the passion of her beau:

“Sitting in my bedroom tonight/ Thinking of how to change your mind/ Since you walked out my life again…../ So I strike a pose and tilt my chin/ And hold the light to suit my skin/ Your favorite t-shirt on again/ Counting hours/ Counting lies/ 3, 2, 1/ And I smile

Taking pictures of myself, self, self../ Guess I’m reaching out to be assured/ All I wanted was to be adored…”[iii]

We are witnesses to a young girl’s life in this song…. or are we? There is more to the published images on her media feed, and she lets us know this in her music.

“Atem Nitzavim HaYom”, our Torah portion this morning, speaks of us as witnesses, standing to receive Jewish law and tradition which is an attainable goal for us all. On the face of it, our “Yom Kippur selfies” now published… it seems to the world that we are identified and active  Jews, here in the synagogue this morning on our Sabbath of Sabbaths. Good for us! But this is just an image.

Does our “Yom Kippur selfie” from this morning tell our whole Jewish story? Are we the Jews we proclaim to be on the outside as well as on the inside?

In Steve Job’s biography he speaks of his adoptive father Paul Jobs, a man good with his hands and a car mechanic by trade. He gave Steve a sense of design and also a sense of pride in the craftsmanship that could be seen, and that which could not be seen, something that Steve insisted be applied to Apple products. Steve Jobs spoke to his biographer explaining that his father refused to use poor wood on the back of cabinets, or to construct a fence that was not of the same quality front and back. In Steve Job’s own words: “For you to sleep well at night, the aesthetic, the quality, has to be carried all the way through.”[iv]

Steve would have approved of the design philosophy Bezalel used to create the Mishkan, the Ark used to carry the Commandments through the wilderness. Our rabbis tell us that it had gold on the outside, as well as on the inside, even though no-one ever saw the interior. The interior gold was hiddur mitzvah, a beautified mitzvah, just to honor God.

Our Torah portion has us ask hard questions of our Jewish identity. We stand here as witnesses today being told Torah is not beyond our reach.

Are we authentic in the Jewish lives we lead? Are we Jews what we proclaim to be to the world at large? Do we live our lives through Jewish values? Have we succeeded in prioritizing the Judaism we say is important to our families and kids? Are we real in the Jewish commitments we espouse? Are we supportive of our local Jewish community and the community at large? Are we giving of Tzedakah? Are we committed to Jewish learning?

Each  High Holy Days, we are beckoned to come to home, back to our self, our place, the Divine. We are beckoned to be better Jews. A breathtaking poem by Yahia Lababidi, an Egyptian Lebanese poet, called “Encounter,” speaks to this process, imagining a self meeting with their better self:
I stirred in the small hours of the morning. Sensing a presence, I did not return to sleep, but ventured into the living room, apprehensively.
There, by the balcony, sat a familiar figure — cross-legged and reading in the semi-dark, with just the milky moonlight for company.
I do not know how I knew, but I did. I recognized the intruder, at once, with a mixture of dread and affection.
“I’m sorry,” were the only words to leave my lips. “I’m sorry, too,” replied my longed-for-self, with a sigh of infinite kindness and pity.
He did not rise to greet me and, somehow, spoke without words, transmitting what was needed.
Catching his glistening eye, the caring made me cry. “You’ve taken every detour to avoid me,” he gently reproached. “For every step I’ve taken towards you, you’ve taken back two”.
I did not know what to say in my defense (how could I protest against myself?) “I missed you,” he said, and feared you’d forgotten me.”
His admonishment was tender as a kiss. “I visit from time to time, and hope you’ll ask me to stay.” I knew what he said was true, and felt that way, too.
“I worried,” he continued, “if I postponed this visit, we might never meet, in this life… and so I came to sharpen your appetite.”
He rose and moved towards me. “There’s no need to speak, return to sleep. But when you rise, try to remember me. And to keep awake.”

Yom Kippur is the day of meeting our longed-for Jewish self and to remember, to take stock, to keep awake. Rabbi Arthur Waskow reframed the word “atonement” from Day of Atonement, using the same letters, to The Day of At-One-Ment, a day when our self makes the supreme effort to become one with our higher self.

And isn’t that what we want for ourselves? To pull ourselves together? To be the best that we can be?

Behold, anyone who is awe-stricken by God shall be blessed,

God will bless them from Zion.

They will see the goodness of Jerusalem all of their days

and live to see their grandchildren

and peace in Israel.